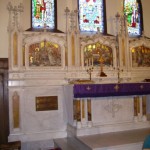 The Loomis Plaque at the High Alter

Close up of the Loomis Plaque

Plaque for the parents of John Loomis 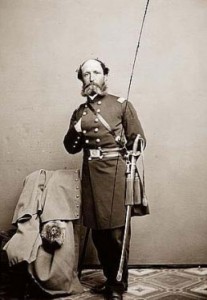 After completing his education, John wanted to follow in his father’s footsteps with a military assignment. His father, Colonel James Loomis, served as the colonel of the First Regiment, Connecticut Militia, from 1815-1818 which consisted of Companies from Hartford, Windsor, Simsbury, Bolton, Tolland, Harwinton, Torrington, New Hartford, Barkhamsted, Hartland, Colebrook, Winchester, and the First Society of Farmington. John chose ultimately to join the China Tea trade. After spending time at sea he entered the lumber business in the Midwest finally locating in Chicago.

He married Mary Hunt born in Sherburne, NY in 1850 returning to Chicago immediately after the wedding where he became a very prosperous business man.
A Memorial Plaque honoring Colonel John Mason Loomis is located on the High Alter.

John Mason Loomis was born January 5, 1825 to Colonel James Loomis and Abigail Sherwood Chaffee in Windsor. His parents are also memorialized with a plaque in the Church.

With the outbreak of the Civil War, John was commissioned as a Colonel and became the commander of the 26th Illinois Infantry Regiment. Under his command they were mustered into federal service August 31, 1861, fulfilling his dream as a young man in Windsor. After finally receiving arms and equipment, they departed February 19, 1862, for New Madrid, MO, joining General John Pope’s Corps. Of note is that Colonel Loomis’ wife Mary accompanied her husband to the front and became head of a company of nurses.

He and his Regiment participated in most of the important battles in the Western Theater. During the Vicksburg Campaign, Colonel Loomis commanded the 1st Brigade, 1st Division, 16th Corps of which the 26th Illinois was a part.

Colonel Loomis resigned April 30, 1864 having sought a promotion to Brigadier General which was not forthcoming. He returned to Chicago to try and resurrect his ruined business, John Mason Loomis & Company. He joined the Peter Marquette Lumber Company ultimately being named President of the company. He became a large real estate owner and was very active
supporting veteran affairs.

In 1874, Colonel Loomis joined his three brothers and a sister to incorporate for the purpose of forming the “Loomis Institute”, later to become the Loomis Chaffee School, to help the education of boys and girls in Windsor.