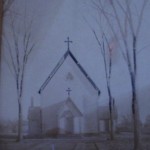 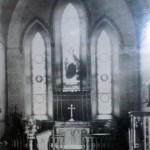 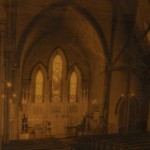 1964 Re-enactment of laying of the Grace Church cornerstone 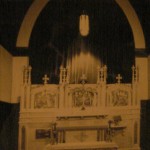 The history of Grace Church reflects a rich and storied past. Although not established as an Episcopal parish until 1842. Windsor had English churchmen as early as 1660. For nearly 100 years, people in the community worshipped in their homes, primarily because northern Connecticut was non-conformist and the established church did not get a start there until the mid-1700’s. At that time, several early Windsor families helped organize the Mother Church of the Cathedral in Hartford which ministered to surrounding neighborhoods including Windsor.

Then in 1842, the Rev. Arthur C. Coxe, Rector of St. John’s Church, Hartford, began the organization of an Episcopal mission in Windsor. By November of that year, Rev. Coxe had founded St. Gabriel’s Church and the cornerstone was laid by Connecticut Bishop Thomas Brownell. In January, 1845, Bishop Brownell consecrated the new church.

From that point forward, St. Gabriel’s grew very rapidly. As early as 1853 there was a move for a new and larger church. The site on which Grace Church now stands was secured shortly thereafter, and the cornerstone of the present building laid in August 1864 during the rectorship of the Rev. Reuel Tuttle, the first resident priest of the parish. One year later, the new church was consecrated by Bishop John Williams and rededicated to the present name “Grace Church.” The parish house was added in 1890.

In 1933 Drastic repairs and the need for enlargement led to the church’s present form and decoration. The frieze of saints, the beautiful woodwork and the magnificent Cherubim vault in the chancel are all from this period. The cornerstone of old St. Gabriel’s was embedded in the re-dos and the church rededicated in 1934.

Since then, Grace Church has undergone considerable growth in meeting the needs of one of northern Connecticut’s most rapidly developing communities. With two weekly worship services, a highly active Sunday school, and excellent music and adult education programs, Grace Church today has over 200 members and continues to be a major influence in the life of the state’s oldest English settlement.

Parishioners take great pride in their long history But they also look to the future with great anticipation. . . . .the anticipation of helping meet the spiritual needs of families in the greater Windsor area for years to come.